Virtual Reality is the technology through which the user feels ported to a digitally created world. The computer generated world and the experiences are designed to simulate the physical presence of the user in such worlds. The idea of virtual reality [VR] is to block out the sensory inputs[eyes and ears] from seeing and hearing the real world and use simulated visual and audio cues via head mounted displays [HMD] and audio headsets respectively to experience the virtual world. This makes the user to be immersed in the virtual world and lets him interact with it as if he is already there. The impressiveness of the VR experience is further established with support of gyroscope and  sensors to track head, hand and body movements.

The term “virtual reality” was first used in a science fiction context in The Judas Mandala, a 1982 novel by Damien Broderick

Virtual Reality and Augmented Reality are two sides of the coin.  Augmented Reality simulates artificial objects in the real environment; Virtual Reality creates an artificial environment to inhabit. A virtual reality headset will typically use one or two screens that are held close to your face and viewed through lenses. It then uses various sensors in order to track the user’s head and potentially their body as they move through space. Using this information, it renders the appropriate images to create the illusion that the user is navigating a completely foreign environment.Augmented reality on the other hand will usually use either glasses or a pass-through camera so that the user can see the real world around them in real time. Digital elements will then either be projected onto the glass, or will be shown on the screen on top of the camera feed. 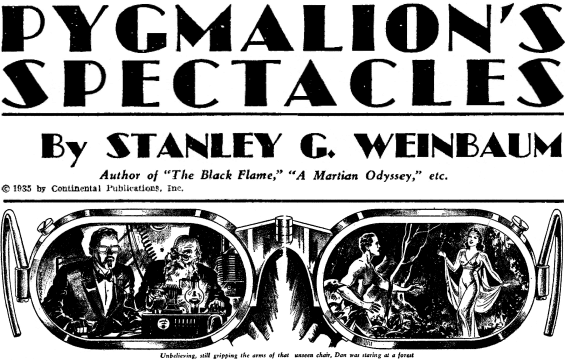 Every technological leap begins with a vision. Once a fictional idea, now a reality! In 1935, Stanley G. Weinbaum in his short story “Pygmalion’s Spectacles” described a goggle-based virtual reality system with holographic recording of fictional experiences, including smell and touch. In 1962, Morton Heilig built “Sensorama“, a prototype of his portable “Experience Theatre” which engages with multiple senses [vision, sound, smell and touch]. In 1968, Ivan Sutherland, created “The Sworld of Damocles, what was widely considered as the first head mounted display. In 1991, Sega announced the Sega VR headset which used LCD screens in the visor, stereo headphones, and inertial sensors that allowed the system to track and react to the movements of the user’s head. In the same year, Virtuality launched and went on to become the first mass-produced, networked, multiplayer VR entertainment system. It was released in many countries, including a dedicated VR arcade at Embarcadero Center in San Francisco. Costing up to $73,000- $200,000 per multi-pod Virtuality system, they featured headsets and exoskeleton gloves that gave one of the first “immersive” VR experiences.

From “Good to Have” to “Must to Have”

Every disruptive technology, if going in the right direction, will go thru the phase of transition from just being considered a “Good To Have” feature to a “Must to Have” sensation. This is the phase where the real use and benefits of the technology is measured thereby leading to a real world problem solving solution. Virtual Reality is has proved to be a “Must To Have” in areas of training, simulations, healthcare, industries, defense, manufacturing design and entertainment. The verticals are expanding on a day to day basis and the benefits out of VR is growing exponentially. The price of VR gears have come down and the users and companies around VR are growing in sizable number day by day thereby revolutionizing the way the visual content is consumed.

As expected game industry is one of the major consumer of Virtual Reality. From low end google cardboard based VR headsets to console based VR systems like Oculus Rift and HTC Vive, gaming industry is dominating the share of applications available. People are fascinated and finding how useful VR is well beyond gaming.

Side effects of Virtual Reality:

A lack of research data and guidelines is leaving consumers in the dark about virtual reality‘s potential negative side effects. Well i would say VR has an impact on the brain in a good way, at times in a bad way. This impact depends on several factors and varies from person to person.Some of the side effects are:

For a more detailed analysis on side effects of VR  and Virtual  Reality best practices click on this link.

Research and Development of VR technologies

VR devices and VR as a technology are going through several research inorder to make the technology and device more efficient, cost effective and improvise. Some of the prime areas of R&D is happening in the following areas.

Talk to the Virtual Reality experts

Virtual reality and Augmented Reality have opened a completely new way to looking at the world. Its usage is enormous and it is impacting the heathcare, L & D , industries and consumer goods in a highly positive manner.With huge conglomerates like Apple, Facebook , Google &++ showing interest and investing heavily, VR to become the next big medium of communication and engagement aint that far.Eventually at one point AR and VR devices will merge together to form a more seamless interactive medium. VR devices of the future will have much more sensors that could intelligently understand the environment in 3D. AR and VR technologies will merge together.

Side Effects of Virtual Reality